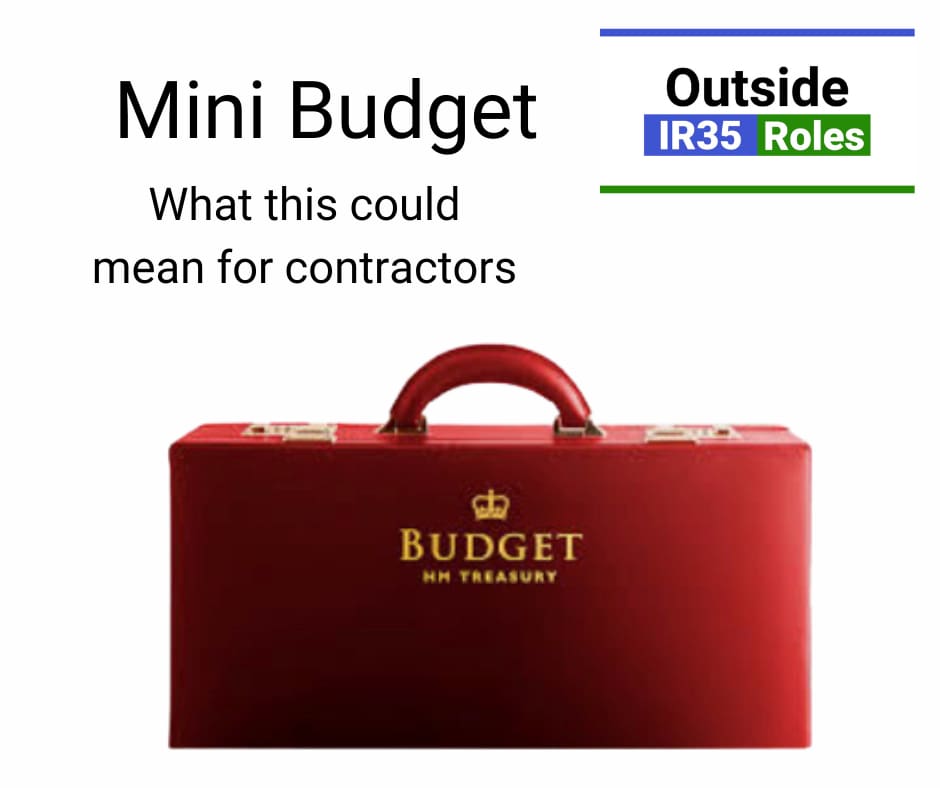 Mini Budget: What this could mean for contractors?

There have been lots of talk around tax cuts and one of the most talked about is the potential abandonment or delay of the scheduled increase in Corporation Tax. Which will come in the form of a marginalised rate which will affect contractors with profits above £50K. And those with profits of £250K could be facing up to 26.5% Corporation Tax from April 2023.

With this having a major impact on contractors and SME’s it would seem hard for Liz Truss to not take any action on this now.

The other most talked about tax cut is in relation to the 1.25% increase of National Insurance to be scrapped. Which with most contractors being on a minimal salary this will not likely have much benefit, if any.

With the 1.25% increase in National Insurance, an equal increase in dividend tax was sneaked in at the same time. A lot of contractors we have spoken to were not aware the dividend tax has increased to 8.75% from the original 7.5% since 6th April 2022.

Will the dividend tax rate get reversed?

Personally, I am sceptical, as it won’t get the coverage (as it didn’t when it came into place) like the NI increase did.

Although it has been brought up a few times now in parliament, the higher rate threshold could be increased to £80,000 (From the current £50,270). So assuming the dividend tax rate remains at 8.75% taking £29,730 in dividends extra. This would result in an extra take home of £27,129 for the year (with the extra tax only being £2,601). So those with their spouses as shareholders will see double the benefit. So this would be a great win for the contractor community after the tough times seen.

It is also possible there could be a reduction in VAT which they are saying will slash inflation. But it could just end up being sector specific.

Will we see the IR35 review Truss promised?

This will be the most important for contractors, will there be any truth in Liz’s promise on the IR35 review? It is probably something we need to accept we need to take with a pinch of salt.

As there has been multiple reviews, consultations and inquiries regarding IR35. In February 2022 the House of Lords published a damaging report into IR35 with clear recommendations on how HMRC can fix it.

With one of those being how CEST doesn’t work and is unreliable. Part of this is it doesn’t include Mutuality of obligation, one of the major factors to determining employment status.

Another major recommendation was the treatment on blanket ban assessments. Which has had a major impact on the contractor market, and is something at Outside IR35 Roles we can help improve in the future.

If Liz listens closely to the House of Lords then we could see some positive changes. So we will have to have our fingers crossed for that.

This website uses cookies to improve your experience while you navigate through the website. Out of these, the cookies that are categorized as necessary are stored on your browser as they are essential for the working of basic functionalities of the website. We also use third-party cookies that help us analyze and understand how you use this website. These cookies will be stored in your browser only with your consent. You also have the option to opt-out of these cookies. But opting out of some of these cookies may affect your browsing experience.
Necessary Always Enabled
Necessary cookies are absolutely essential for the website to function properly. These cookies ensure basic functionalities and security features of the website, anonymously.
Functional
Functional cookies help to perform certain functionalities like sharing the content of the website on social media platforms, collect feedbacks, and other third-party features.
Performance
Performance cookies are used to understand and analyze the key performance indexes of the website which helps in delivering a better user experience for the visitors.
Analytics
Analytical cookies are used to understand how visitors interact with the website. These cookies help provide information on metrics the number of visitors, bounce rate, traffic source, etc.
Advertisement
Advertisement cookies are used to provide visitors with relevant ads and marketing campaigns. These cookies track visitors across websites and collect information to provide customized ads.
Others
Other uncategorized cookies are those that are being analyzed and have not been classified into a category as yet.
SAVE & ACCEPT